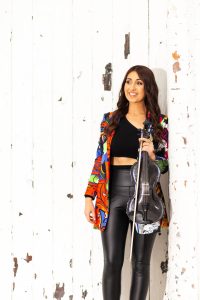 Éadaoin Ní Mhaicín is a multi-award winning Harp & Fiddle player from County Mayo, Ireland. With an excess of 10 All Ireland titles to her name and The Camac Trophy from Lorient Interceltique Festival, she has played to thousands of people all over the world in multiple different venues.
In 2019 she co-founded the band EADAOIN who went straight to number 1 on the iTunes world music charts with the release of their singles 9 Years & Bunalaka. She is currently getting ready to launch her new single ‘Against Time’ in July 2021. As well as building a reputation as a renowned solo performer, Éadaoin also performs
regularly with fiddle virtuoso Frankie Gavin in his new band, ‘The Provenance’.
She impressively managed to achieve a First Class Honours in her Master’s degree in Music at the University of Limerick and received her TTCT (Teaching Diploma from Comhaltas Ceoltóirí Éireann) also.
Éadaoin has also appeared on numerous, national and international, radio and television stations such as RTÉ, BBC, TV3 and TG4.