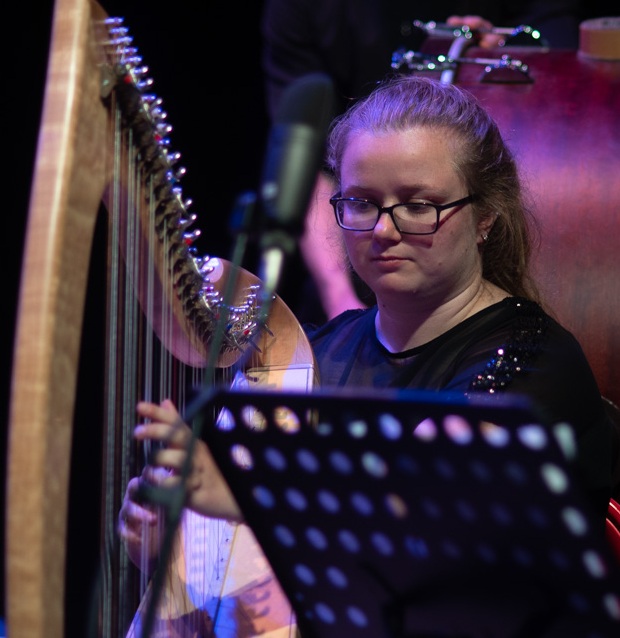 Siobhan Buckley is from an area steeped in traditional Irish music in North Cork. Siobhan began her music studies at the Cork County School of Music (CCSM) under the direction of Damhnait Nic Suibhne and is now an accomplished musician on many traditional instruments as well as being a classical pianist.

During her time in the CCSM, Siobhan received many scholarships and awards including the ‘Special Achievement Award’ in 2008 for her outstanding commitment and dedication to music.

Siobhan continued her musical studies at third level in NUI Maynooth and was offered a place to study harp under Anne-Marie O’Farrell where she joined the Kylemore Harp Ensemble and performed in venues such as The National Concert Hall, Dublin and at the Edinburgh International Harp Festival in 2012.

As a soloist, Siobhan is a multiple prize-winner at the O’Carolan Harp Festival in Nobber Co. Meath, the ESB Feis Ceoil and at Fleadh Ceoil ná hÉireann where she won first place in the senior harp slow air competition in 2015.

Siobhan has also performed for President Michael D. Higgins in Dublin Castle for the centenary celebrations of the 1916 Easter Rising. Siobhan has also collaborated and performed with various groups and musicians including The ConTempo String Quartet for the Kanturk Arts Festival, The Clare Memory Orchestra (currently known as the Irish Memory Orchestra), Scottish Harpist Catriona McKay and most recently, Siobhan performed as a guest musician on the title track of singer songwriter John Spillane’s new album ‘One Hundred Snow White Horses’ which was released in April 2021.

Siobhan regularly gives performances and harp workshops here in Ireland and in the UK for the Clarsach Society.

Siobhan is highly regarded in traditional music circles for her music arrangements and has arranged music for various groups and Trad Orchestras across the country,  groups who have gone on to win medals at Fleadh Ceoil ná hÉireann, and for groups who were finalists and prize-winners in the Siansa Gael Linn music competition which was broadcast live on RTÉ Radió na Gaeltachta from the NCH (Lasair 2014, Lonrach 2017,2018,2019).

In 2018 Siobhan composed a suite of music called ‘Turas’ for the MGL Harp Orchestra and under Siobhan’s leadership, both the harp and traditional music programmes in Music Generation Laois have flourished. Siobhan has travelled to New York, Spain, Monaco and Edinburgh with her ensembles to perform.